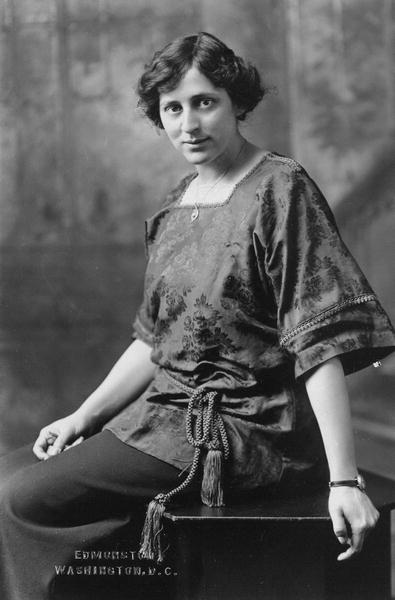 Crystal Eastman was an American activist and initiator, a leader and champion who left her mark on many of the great social justice movements of the twentieth century – labour, feminism, internationalism, free speech, peace. As a feminist journalist and working mother in the 1920s, her writing in Time and Tide examined a range of issues pertinent to gender equality between women and men – not only in the public arenas of politics and the economic workplace but also in private life, in love, sex, marriage, and the family.

Eastman was reared in Elmira, New York, the only daughter in an unconventional, dual-breadwinner family. Her mother, Annis Ford Eastman, was an ordained Congregational Minister and the driving force in a feminist household where all chores were rotated regardless of gender. In 1903, Crystal graduated from Vassar College, then earned an MA in Sociology from Columbia University in 1904, and a J.D. from New York University Law School, where she graduated second in her class in 1907.

By the time Eastman moved from New York to London and began to write for Time and Tide in the early 1920s, her reputation preceded her. A labour lawyer, she had drafted the first workers’ compensation law in the United States in 1910. An international peace campaigner, she founded the Woman’s Peace Party of New York in 1914 – today, the Women’s International League for Peace and Freedom. When unprecedented U.S. government censorship followed American entry into World War I, she engineered the founding of the famed American Civil Liberties Union, or ACLU.

Eastman’s multi-movement legacy is considerable, but she is best known for her leadership in the U.S. women’s movement. In 1913, she was the first person Alice Paul and Lucy Burns contacted to launch the National Woman’s Party (NWP) – the militant group whose direct-action tactics won passage of the Constitutional suffrage amendment ratified in 1920. In 1923, Eastman then co-authored the Equal Rights Amendment. In the interim, she served as a key strategist and suffrage organizer, mobilizing the sprawling Midwest region in 1914 and helping to chart the NWP’s signature “Party in Power” plan that leveraged women voters in the suffrage states of the West to force legislators to move the federal amendment through Congress. Eastman was also instrumental in reeling in Mrs. Alva Belmont, the widowed heir to the Vanderbilt family fortune who became the chief financier of the NWP. And Eastman was a fearless and spellbinding public speaker who took the suffrage case to the press, the halls of Congress, and the streets.

In her writing for Time and Tide between 1923-27, Eastman most frequently covered the transatlantic schism between “equalitarian” feminists like herself, Lady Rhondda, Helen Archdale, and others in the magazine’s circle – feminists who would brook no gender distinctions in the law and public policy – and those who supported special protective legislation long advocated by progressives and labour women in the U.S. and some countries in Europe. Eastman also worked with Rhondda and others on equalitarian politics through the Open Door Council. She sat on its Executive Committee in 1925 and 1926.

Eastman’s journalism reflects her pursuit of a feminist politics of private as well as public life. Divorced in 1916 after learning of her husband’s infidelity, she refused alimony, telling newspapers at the time that “no self-respecting feminist would accept alimony – it is a relic of the past.”  Later that year, she married the English pacifist and publicist Walter Fuller, who became the father of her two children. From that point on, both her activism and journalism advanced debates still pressing today: reproductive rights, paid parental leave, economic partnership within marriage, wages for housework, feminist masculinity, and single motherhood by choice, among others.

Eastman’s last article in Time and Tide was “What Shall We Do with the Women’s Page?” in which she argued that women need a place of their own to come together: “a forum, a clearing-house [sic] for the exchange of ideas, a meeting-place where they can learn from each other’s experiments and benefit by each others [sic] conclusions” (20 May 1927). Her closing point, however, was broader in scope and resonated with the intersectional pulse long animating her politics. The women’s pages, she wrote – like the feminist movement itself – must speak to a diverse group of stakeholders, including men. That Eastman’s progression echoes the magazine’s own expanding vision of its editorial politics at that time confirms that when she set sail for New York for the last time on 9 August 1927, Time and Tide had been the warm water that sustained her in London, its currents ceaselessly propelling her forward while they also kept carrying her home.

Crystal Eastman died of nephritis in July 1928, at the age of 47. Her obituary called her a beacon, and a symbol of what a free woman might be.

By Dr Amy Aronson. Dr Aronson is Professor of Journalism and Media Studies at Fordham University and is co-editor of the international quarterly, Media History. She is the author of Taking Liberties: Early American Women’s Magazines and Their Readers (Praeger, 2002), and she recently authored the first full-length biography of Crystal Eastman, entitled Crystal Eastman: A Revolutionary Life (OUP, 2020).