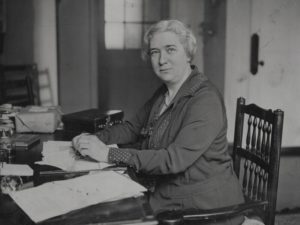 To mark International Women’s Day 2021, we held a high schools’ writing competition celebrating brilliant women. Drawing on Time and Tide’s weekly ‘Personalities & Powers’ feature, we invited students to write profiles of brilliant women in the public sphere who inspire them.

Entries were judged by Ioney Smallhorne, writer and educator, Vivien Brown, author and member of the Society of Women Writers and Journalists, and Catherine Baksi, freelance legal journalist writing for The Times, The Guardian, The Telegraph and legal publications including the Law Society Gazette.

‘Personalities & Powers’ and the ‘Brilliance bias’

From its launch in May 1920, Time and Tide profiled public figures in a weekly illustrated ‘Personalities & Powers’ column. Celebrating ‘women as well as men of achievement’, the magazine used this column to position itself in opposition to other organs of the British press, which, it claimed, failed ‘almost entirely to teach us anything material about women of the day.’ One such woman was the biologist and feminist Professor Winifred Cullis. Published in Time and Tide 10 April 1925 and reproduced in the Souvenir Edition of the magazine, Cullis’ profile praised her professional and political achievements, inviting readers to view her as an aspirational figure whose accomplishments equalled those of men in the public sphere.

In celebrating a female scientist, Time and Tide challenged a ‘brilliance bias’ that, according to Caroline Criado Perez, still persists today: the assumption that genius and intelligence are inherently male qualities. Quoting a US study, Perez claims that 14-year-olds, when asked to draw a scientist, draw ‘four times as many male scientists as female scientists’ – this, she argues, is because girls are still learning that ‘smartness’ and ‘brilliance’ do not belong to them (Invisible Women 2019, 100-101). Time and Tide’s mission to show women that they are capable of achieving greatness on the same terms as men is, it would seem, still relevant.

Competition entries were generated by an 11-minute pre-recorded online writing workshop, developed and led by writer and educator Ioney Smallhorne. The video is still available as a teaching resource. An accompanying PDF of writing prompts is available on our Resources page.