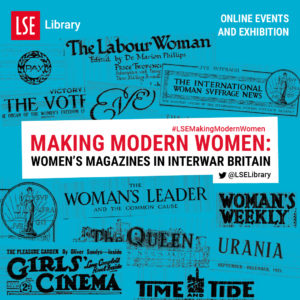 ‘An excellent chronicle of some (almost) forgotten social history.’

‘Fascinating’; ‘loved it’; ‘thank you so much for putting it online.’

This free online exhibition of interwar women’s magazines was curated by The Women’s Library at the London School of Economics in collaboration with Time and Tide: Connections and Legacies. It ran between February and June 2021, but is still available on the LSE Library website, here.

The exhibition marked the centenary of the Six Point Group, the equal rights feminist organisation founded in February 1921 by Lady Margaret Rhondda and other feminists closely associated with Time and Tide. Across five sections – Reading Women, Fashioning Women, Home and Work, Campaigning Women, and International Women – the exhibition placed Time and Tide within the wider ecology of magazines produced by and for women in Britain during the 1920s and 1930s. Examples included the periodicals of feminist and women’s organisations, along with upmarket fashion magazines, middle-class domestic magazines, and publications targeting working-class readers.

Like Time and Tide, which advertised itself as ‘the modern weekly for the modern woman’, the magazines featured in this exhibition participated in ‘making modern women’ in the interwar years. They also evidence the breadth and vitality of feminist activism and influence during a period when the women’s movement is commonly thought to have gone into retreat only to resurface with the ‘second wave’ in the 1970s.

The exhibition spotlighted numerous connections between Time and Tide and other women’s magazines whose producers and readers shared political and cultural interests.

Elite society magazines like The Queen also published romantic fiction. The experimental short story by modernist author Dorothy Richardson listed in this bill of contents is a surprising discovery, published under the brief editorship of literary salonnière Naomi Royde-Smith who attempted to fashion the magazine along Time and Tide lines.

Fashion advertising was a key source of revenue for women’s magazines, including feminist publications. Though Time and Tide had no fashion column and mocked ‘women’s pages’ with their own playful ‘men’s page’, advertisements from Debenham and Freebody augmented the magazine’s finances well into the early 1930s, and provided possible alignments of fashionability and feminism. You can read Time and Tide’s ‘men’s page’ in the Souvenir Edition.

Margaret Leonora Eyles was a novelist, journalist, and author of such polemical texts as The Woman in the Little House (1922), which was serialised in Time and Tide. A lifelong socialist, her agony columns in the women’s press were as much concerned with sex, motherhood, and employment as with romantic dilemmas.

Lady Rhondda, founder and later editor of Time and Tide, was a founding member of the Six Point Group, Britain’s leading equal rights organisation between the wars. In this issue of Home and Country, she explains its programme to members of the National Federation of Women’s Institutes, one of the largest organisations representing housewives and mothers in this period.

Formed in 1915, the Women’s International League for Peace and Freedom (WILPF) began publishing Pax in November 1925 from their new headquarters in Geneva. The newsletter documents the involvement of feminist pacifists in international campaigns as they debated and intervened in world conflicts and promoted peace. WILPF continues as an active organisation today. Women’s international work for peace provides an important context for Time and Tide’s increasingly international focus in the 1930s.

Alongside the Exhibition, The Women’s Library organised a series of talks. You can watch the following via these links:

Dr Eleanor Reed introduces us to knitting patterns, styles and stitch patterns from interwar women’s magazines. Tune in if you are interested in interwar fashion or just into knitting.

Find out how the idea of ‘respectable women’ shifted through popular culture in the 1920s and 1930s.

Community activist and researcher Jenny White celebrates two key editors of Urania, the radical zine published from 1916 to 1940 which sought to abolish the gender binary.

Novelist A.J. Pearce talks about her best-selling novel Dear Mrs Bird and the wartime magazines and agony aunt letters that influenced it.

‘The Furrowed Middlebrow: novels by and for women 1920s-1950s’ – Elizabeth Crawford